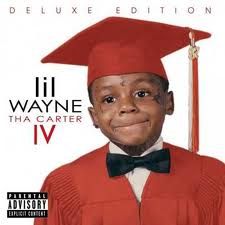 Less than three weeks after the U.S. iTunes Store's single-week album sales record was broken by Jay-Z & Kanye West's "Watch the Throne," it's been smashed again and this time by Lil Wayne's new "Tha Carter 4."

According to Rolling Stone, C4 has sold over 300,000 downloads via iTunes in only its first four days of release, according to Cash Money/Universal Republic Records. That outpaces the 290,000 that "Throne" moved through iTunes in its entire first week.

C4's achievement is all the more impressive because it's available through all digital and physical retailers, not just iTunes. Comparatively, "Throne" was sold exclusively through iTunes for its first four days of release.

Further, "Carter IV" is on its way to an overall first-week start of more than 850,000 copies digital and physical sales combined - according to industry prognosticators.

If "Carter IV" shifts 850,000 or more, it will instantly mark the biggest sales week for a hip-hop album since his own "Carter III" bowed with 1.01 million on the June 28, 2008 chart according to Nielsen SoundScan.
Posted by Hustle at 05:27