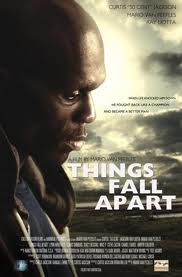 It looks like things are falling apart rather quickly for 50 Cent's upcoming football flick Things Fall Apart. After being sued for $200,000 for unpaid services on the film, the Queens rapper recently lost a major legal battle against famed Nigerian author Chinua Achebe over the movie's title.

According to BroadwayGhana.com, 50 Cent was recently forced to change the name of his upcoming film Things Falls Apart over a copyright dispute involving the title. Upon learning of the film's title, Chinua Achebe, who wrote the iconic 1958 novel of the same name, threatened to sue Fiddy and the film's backers over a violation his celebrated book's copyright.

50 and company attempted settle out of court with the African author's foundation, offering them $1 million to use the title. Ultimately, the Chinua Achebe Foundation refused the offer, and the film's producers persuaded the G-Unit general to change the title to All Things Fall Apart to avoid a more serious legal battle.
Posted by Hustle at 02:29