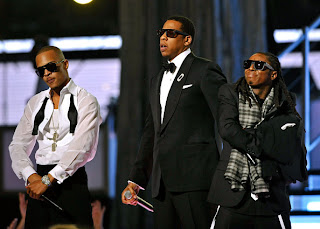 The only time when Jigga has ever went at anyone full force was at the time he beefed with Nas.

Hey its God's son after all, Jigga had to pull a rabbit out of the hat but I still feel he fell short, fast forward to currently and looks like Jigga might come out guns blazing this after Weezy dissed him and his wife.


Weezy says he was aware of how "It's Good" would be perceived and that it didn't faze him. On the track, Wayne raps:

"Talk about baby money, I got your baby money.
Kidnap your bitch get that that how much you love your lady money
I know you fake nigga, press your brakes nigga.
I’ll take you out, that’s a date nigga.
I’m a grown ass blood, stop playing with me."

Following the leak of “It’s Good”, Lil Wayne has already spoken on how he doesn’t fear repercussions from dissing Jay-Z. Speaking with VIBE.com, Weezy explained that he knew what the response would be to the record, but that it didn’t concern him.

“I know there won’t be any repercussions behind what I did,” he said. “I know for a fact music is about perception. You can’t do anything but perceive what you hear. I know that for a fact. So I can’t ever be upset about someone’s reaction.”

He elaborated by stating that he’s aware of how a song like “It’s Good” would be perceived, but it’s all part of his plan.

“I’m not going to say I don’t know what would happen before I even say [something on record],” he continued. “I do know what will happen. I’m aware of it. But it is what it is.
Posted by Hustle at 00:13