The First 24 Hours of Responses to Kendrick Lamar's "Control" Verse 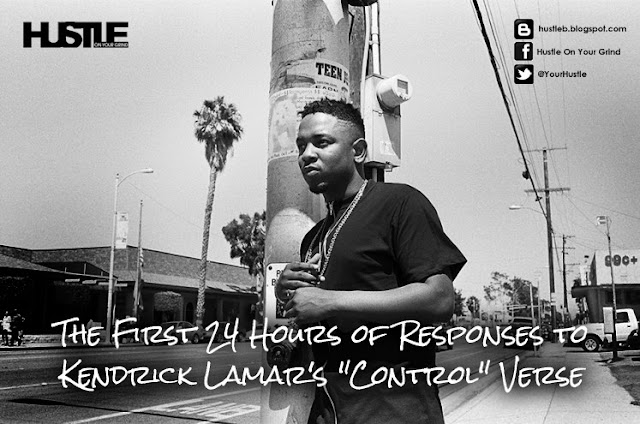 Kendrick, Kendrick, you done did boy, has the rap game shaking like a leaf in the wind. When someone attacks your city - the best way is to fight back and these MCs below did just that but not all attacks are great attacks but hey what the hell.

Mood: Excited.
Low blows: None.
He just threatens Kendrick metaphorically, and mentions that Kendrick said he was honored to meet him once. All his punches are pulled when he asks Dr. Dre for a job midway through, though.
Best Shots At Kendrick:
"Little homie you ain't the king of New York
You the next thing on my fork.
The messenger with all them rings on that horse
Carrying king's heads 'til I kick you in the chest and you cough
And fall into a bottomless pit
Homie, you know how many bodies that fit?
When we met you said, 'It's an honor man, the Yaowa can spit.'"
Better Than Kendrick: Nah.
Rating: 46 out of 108 Mics.

B.o.B. "How 2 Rap"
Mood: Defensive.
Low Blows: He seems more interested in cataloging the common criticisms lobbed at his career than scoring any points against anyone specific. Then he decides he finds rap "boring" (!?) and plays guitar for the rest of the track.
Best Shots at Kendrick: "Consider this tax for the swag that my city has given you niggas" is the closest to a real shot, if you think maybe he's sending shots at Kendrick for largely ignoring Atlanta's contributions when Kendrick listed his primary competition. Although Andre was mentioned, so this is kind of a reach.
Better Than Kendrick: Nah.
Rating: .038 out of 108 Mics.

Lupe Fiasco "SLR 2"
Mood: Perpetually aggrieved.
Low Blows: He sorta tries to get under Kendrick's skin by saying he raps like Wayne. Not sure why that's a diss, since it's not like Kendrick sounds that much like Wayne. Not sure there are any real lyrical body blows here.
Best Shots: "He's so crazy, look at the little baby
Nigga you ain't Nas, nigga you ain't Jay-Z
You will respect me, you will reject me
But I've done so much, no matter how far you go, you will reflect me."
Better Than Kendrick: Nah.
Rating: Not sure this can be properly rated, as we haven't been to Harvard and don't speak German, so translating from Lupe to English would take too long. There are probably 'levels' to this we don't get, although the tiresome meta explanations ("That was Adolf, reacting to my new shit") don't really make such an exercise seem fruitful. The parts where he explicitly jabs at Kendrick sound insecure about his own place in hip-hop and don't ring particularly true.
Rating:We're going to slap 54 out of 108 Mics on this, mostly in deference to the first "SLR."

Mickey Factz "South Park"
Mood: Just happy to be here.
Low Blows: He makes a sly Lady Gaga reference but it doesn't really land like a body blow. Sometimes being too clever makes it feel like a pulled punch.
Best Shots: Comparing him to Omar Epps in Juice is kind of funny.
Better Than Kendrick: Nah.
Rating: One, this guy doesn't have much traction right now as is, so it's hard to see him on Kendrick's level. Two, it's hard to open your verse with "Where I've been at, what I'm up to/Nobody cares," and still expect your rhymes to land with any authority.
Rating:24 out of 108 Mics.

Astro "KONY"
Mood: Like he's reading a teleprompter.
Low Blows: "You better chill with that Napoleon syndrome." Ha! Kendrick is kinda short!
Best Shots: See: Low Blows. His other disses are solely focused on not disrespecting legends while admitting that "ain't nobody repping [NYC] right, they scared, all talk." Hard to argue that he shouldn't claim king when no one else can.
Better Than Kendrick: C'mon.
Rating: 36 out of 108 Mics.

King Los "Control (Remix)"
Mood: Inspired.
Low Blows: None. In fact, he ends the verse praising every rapper mentioned in the original control. ("This nigga Drake nice on the mic and act/So many hits he fucked around and brought lightskin back.")
Best Shots: The entire song is no shots unless the line about Pusha T "pushing so long that he defines being a hustler" is a secret diss about his being old.
Better Than Kendrick: Nah, but probably the best/most entertaining effort, from a technical standpoint, on the entire list.
Rating: Los is probably the most underrated rapper on here, but this isn't really an answer record so much as an excuse for Los to show off that he has bars in a traditional sense. So, if you love hearing lines like "They gon have to have me shackled and tackled at tabernacles/While havin' my adams apple detached in a baptist chapel"—and who doesn't?!—then you should check this song out.
Rating: Not a diss song, but a solid 70 out of 108 Mics.

Cassidy "Control Freestyle"
Mood: Someone who's had a lot on his mind. (This song is nearly six minutes long.)
Low Blows: None directed at Lamar, who, he says, got him hype. At a rhetorical target, who is apparently a homosexual dickhead pussy hermaphrodite rookie, though, there are many low blows.
Best Shots: There're no real shots here, although at the end he claims that Kendrick wouldn't be able to shine on him on a song. My favorite line, though, is "I'm not in the best shape like I would like to be/But I exercise every time I lift my pipe to pee."
Better Than Kendrick: Nah.
Rating: Cassidy has always been a pretty strong punchline rapper and it's nice to see him get some clever work in. That said, this is six minutes straight #bars, which is a pretty epic undertaking to listen to when you've already heard this beat as many times as I have now.
Rating:65 out of 108 Mics.
Posted by Hustle at 13:04