All the fame chasing hustlers - this might be your chance at stardom (not sure about the money as many actors run around crying that they are broke).

Members of the public are invited to audition for roles in the second series of the multiple award-winning SABC1 drama Interxexions, which is currently in pre-production. The first auditions will take place in Johannesburg, followed by Durban and Cape Town.

Intersexions 1 consisted of 25 standalone episodes, each linked by a character, which portrayed how HIV moves through the human sexual network. A 26th episode took the form of a documentary that explained how HIV spread throughout the 25 stories – from the point of view of the virus itself. It immediately grabbed audiences’ attention, and within three weeks of first being aired in late 2010 it became South Africa’s second-most popular television show across all genres. Viewers actively engaged with the series on social media, frequently sending more than 2,500 tweets per episode – while they were being screened.

The first series garnered local and international acclaim. It won an unprecedented 13 South African Film and Television Awards (SAFTAs) earlier this year, as well as a Peabody Award – the leading global broadcast accolade.

The first round of auditions for Intersexions II takes place in Johannesburg on 4 August, at the Bassline club at 10 Henry Nxumalo Street, in Newtown. People wishing to audition should prepare one of four roles, which can be accessed on www.facebook.com/pages/InterSEXions, and they may audition in any of the country’s official languages. 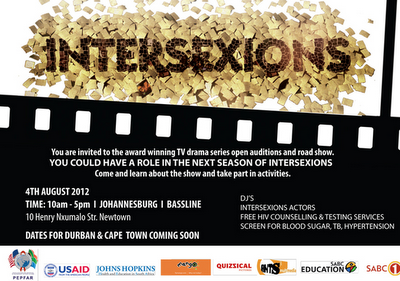