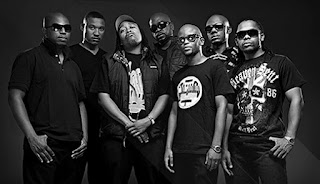 Besides a few rappers like Lil Wayne and Eminem - just to name a few that are selling millions of albums - many MCs are battling to move 500 000 units which is gold in the States.

We albums online months before they hit the stores - faced with survive, adapt or die mentality - US rappers started seeing the internet as a friend than foe. The new cats started using it to their advantage and the old cats joined in after debates or ringtone rappers or online rappers faded off, giving away quality free music for downloads - that way they remain relevant and still make cash in bookings. Who can forget Soulja Boy? The now fallen off rapper blew up on YouTube without a record deal.

But this is not to blow the US' horn but highlight one of the factors affecting local hip-hop. South Africa is blessed with talent, MCs who have a way with words, clever rhymes - great talent from the likes of the veterans in the game - Amu, Skwatta, HHP, ProVerb to the new cats Zakwe, AKA - talent is undeniable there but what is the problem then? why can't SA music be at the level say where Naija music is? Can we blame radio stations, that they don't play local music? Well Soulja Boy never waited for radio - he used the internet to grab people's attention and successfully so, now he's known across the globe.

It is simple as ABC - some local artists fail when it comes to marketing, fail is even an understatement, they suck at it - simple as that. Everyone needs marketing - you you have any idea how much global companies like Coke, Nissan or BMW pay on marketing? I remember once I wanted to interview Tuks and he sent me to speak to his manager…like really? dude are you for real right? Right there he missed the point, an opportunity to get free publicity. And there are many like him that will send you to g speak to their manager.

We are living in an era were online is a community by it self - people can't go a day without Facebook, BBM or Twitter. Yet only a few rappers out their have their own websites(don't give me the websites are expensive speech). For some of them that do, their sites haven't been updated in ages. Some don't even have YouTube accounts(sigh SMH). These are the factors we are facing, how can I even tell my overseas buddies about your music when we can't find you online?

These are platforms to market one's self and get your music to the world but yet again it's seems as if it's a taboo.

They need to change their strategies and learn from musicians across the globe. Pollute the internet with your presence, be in our face - as much as some will get annoyed by that - the point is you will be known, you will drive your message across. Only a few give away music for free(if you say I won't give away mine - well, either way we end up getting the album for free from a friend), hell even Kanye gives away music online for free and he's an industry major player. People get excited before his album drops cause of the leaked material.

South African rap is suffering not because of house music but because artists can't utilize social media effectively. Facebook and Twitter alone aren't enough - and statuses about you chilling in the VIP won't make us wanna buy your album. Instagram us pictures of you in the studio, brief us about your performance - flood us with your music online and importantly update your website. The more people flock to your site, you can make money on the Google ads also from ringtones. Give us enough music for us to trust you enough that your are a sick artist and we will gladly pay for your single on iTunes.

The lesson is use the internet to your full advantage - it's like the matrix - choose the red or blue pill. One being that the internet can help push your career to the next level, if it's music people feel - money will be spent on it, your name mentioned in the who's the best MC debates or choose the other pill... keep waiting for radio or a miracle.
Posted by Hustle at 01:35