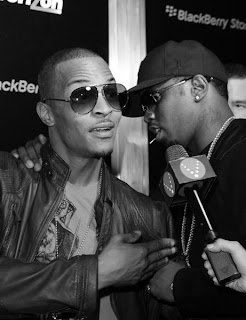 T.I. had to get on the mic and squash a fight at a BET Hip Hop Awards afterparty - that started because Sean "Diddy" Combs was upset Kenny Burns and his crew weren't drinking Ciroc!

Down in Atlanta, after the BET Hip Hop Awards, Diddy was at an afterparty where he started popping off at Kenny Burns (who works with Ciroc's competitor Grey Goose) and a few dudes who WERE NOT drinking Ciroc. And drinks were thrown.......Basketball Wives style!  Diddy cursed everybody out from the mic and yelled fightin' words at Kenny.

But before this could turn into an ugly situation, T.I. (still on parole) got on the mic and put Diddy in check.

Rightfully so, T.I. told Diddy that he had too much money to be engaging in petty b.s. and that those fellas had the right to drink WHATEVER vodka they wanted because they paid for it!

He sealed the deal when he told Diddy, "They're not getting paid to drink (Ciroc)!"
Posted by Hustle at 00:26