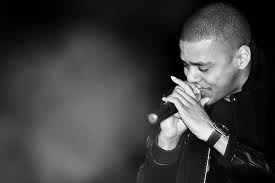 On B.o.B's track "Gladiators" - a hungry for success Cole said, Many blessins sent from heaven thanking God to be alive/flight attendant woke me up said Mr.Cole you have arrived/welcome in this game the price of fame is steep Lord help em’/keep em’ sane prayin’ that the heat won’t melt em/I’m headed to the top I could’nt be more welcome.

And on top he did end up selling over 217K units of his debut album Cole World: The Sideline Story. With minimal radio support, the Fayetteville lyricist's debut takes the top spot on the charts over Adele and Blink-182. While the Roc Nation rapper and North Carolina native previously shared his frustration with album pushbacks and discussed his having to wait for a Jay-Z record on the album, the end product has indeed become a success both critically and commercially even without a prominent radio single.

According to Hits Daily Double, the album has sold over 217,000 units, bumping Adele's 21 for the number one position. Blink-182's comeback album Neighborhoods follows at a close second.
Posted by Hustle at 06:49