Jay-Z, Samsung, and the Branding of Music: Is Selling Out Still the Same Old Selling Out? 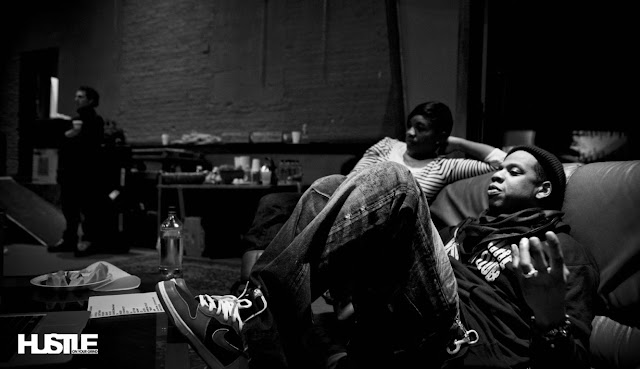 We came across this article from Pigeonsandplanes and thought what a good read.

Jay-Z’s latest album Magna Carta Holy Grail was just announced on Sunday night and comes out in a little less than a month, on July 4, but it’s already sold a million copies. Samsung has long been partnering with high-profile musicians to help push their brand, specifically, their phones, which have been struggling to battle Apple and Blackberry in popularity and public perception. They got the elusive Prince to play a sold-out, highly branded showcase at SXSW, and now they’ve added Jay-Z to their roster.

While his wife Beyoncé has been rolling out her new album in a similarly corporate-oriented fashion, the lengthy video that Jay dropped during Game 5 of the NBA finals is far more commercial than album teaser. The experiences it conveys are polished and suggestive, with tablets inserted into the recording process as convenient tools that are helping Jay-Z push himself to make the best music possible. There’s even a scene where the guys blow their speakers, skillfully implying the evolving and sometimes rocky relationship between hip-hop and technology.

In this case, the relationship is more than just a part of the creative process. The Wall Street Journal reports that Samsung has already purchased a million copies of Hov’s album—for around $5 a piece—which amounts to a large chunk of cash that goes into his pocket regardless of any other aspects of the deal. The million copies of the record will be distributed to Samsung’s users via a special application for their phone, which, as Business Week points out, effectively establishes Samsung as a gatekeeper of the record. Whereas many artists are opting to stream their albums early for all to hear, Jay is making money and moving units by allowing a brand to dictate that their customers hear it first.

carterererer 300x124 Jay Z, Samsung, and the Branding of Music: Is Selling Out Still the Same Old Selling Out?Especially in the rap world, where album leaks are practically industry standard, a move like this one puts Jay ahead of most of his slightly younger peers when it comes to subverting the old, now seemingly-failed album sales model. But it raises some important issues, one being: will these sales count toward his RIAA status on the album? As per Jay’s tweet, Billboard may not be counting these million copies as part of their album charts. It brings to mind the stunt that Amazon and Lady Gaga pulled back in 2011 to sell Born This Way for ninety-nine cents a copy in order to boost first-week numbers. Then there’s the time Taylor Swift offered copies of Red as an add-on to Papa John customers ordering pizzas—the album wasn’t free but it was available for an extra $13, hand-delivered with any pizza purchase.

Billboard didn’t revise their numbers with the previous two examples, but MTV reports that they won’t be counting any of the Samsung sales toward their reports—something that Hov’s tweet above predicted, indicating he may have known this was the case before it was officially reported.

Interestingly enough, it turns out that music isn’t the only industry that has been dabbling in corporate buy-outs and brand partnerships to boost the slagging consumer market. The book publishing industry has experienced a similar dwindle in advances, contracts, and overall sales. The corporate sponsorship route started to enter the picture back in 2011 when publishing experts started actively encouraging new and old authors to adopt this model. Not only that, but now authors can hire marketing firms to buy their books in initial large chunks, catapulting them to the best-seller list, an important seal of approval and alterer of public perception.

The market is trending more toward consumers getting their music, news, and literature for free, and the ways that both publishing and music are morphing in response to this is fascinating and a little confusing to watch. Lines feel a bit blurred, sometimes even crossed, when brands are bolstering budgets—but then again, how different is their control and influence from what the publishing houses and record labels previously held?

Which leads to the relentless question: is selling out still the same old selling out? Selling out used to irk fans because it meant the quality of art they loved had been sacrificed and infiltrated with corporate and mainstream conceptions—watered down for the sake of the money. The idea that a great artist would surrender any amount of creative control simply to get paid has long been regarded as shameful, not just by society and fans, but by other artists. In Jay-Z’s case, the most obvious juxtaposition we can hold up is Kanye’s blatant defiance to even release a single in support of Yeezus. His rant at Governors Ball laid out his mission statement pretty clearly, and it definitely didn’t involve any corporate branding. While Jay was in some boardroom shaking hands and drafting contracts with lawyers and executives, Kanye was probably in the studio writing the lyrics, “Fuck you and your corporation, you n****s can’t control me.”
But it seems unlikely that Samsung would have much control over the content or character of music that Jay-Z will release on his twelfth studio album—so why does it still rub us the wrong way?
Aligning artistic endeavors with a brand seems to be the new industry standard for commercial success. Look at Red Bull’s Music Academy, a traveling event that has fostered inventive artistic experiences that had been neglected because of lack of commercial viability. If a brand like Red Bull is opening up the space for marginal art to be expressed, should we still be wary? Or should we embrace the benevolence of big money? Is there reason to be concerned, or is it like Jay says in the video, “We don’t have any rules, everyone’s trying to figure it out. That’s why the internet is like the Wild West, the Wild Wild West—we need to write the new rules.” What’s most concerning is to consider who is writing the rules—is it Jay-Z or is it Samsung? Is it the artists and the fans or the corporations?
Posted by Hustle at 23:17