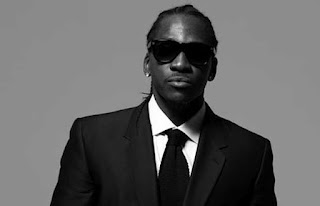 It's been a minute since we've been missing on the hip-hop stage - the game was stale and needed a reboot. Pusha T called us right back from doing motivational articles that helps elevate people's minds.

Like the legendary Nas raps "They Shooting", ah he made us look. Pusha T fired the first shot aiming his gun at Drake and Young Chop. Whether it's taking the high road, Drake didn't respond but Lil Wayne - went on Twitter and tweeted, Fuk pusha t and anybody that love em.

On the track "Exodus 23:1" Pusha is believed to be gunning for Drake and Young Chop. The question is… is it a publicity stunt?

Over a ghostly beat, the G.O.O.D. Music signee takes square aim at Drizzy with lines including, "Beef is when you hide behind them other niggas / But they ain't killers, they ain't pullin' them triggers, fuck niggas."

He made reference to Drake's recording contract, most likely referring to the fact that he's signed to Lil Wayne, who is signed to Birdman whose label is housed under Universal Music. "Contract all fucked / Explain up I guess that means you all fucked up / You signed to one nigga that signed to another nigga that's signed to three niggas / Now that's bad luck," he raps.

Young Chop, on the other hand, got a one-off couplet about his issue with Kanye West remaking his beat for the remix of Chief Keef's "I Don't Like." "You can keep your beats, nigga / We'd much rather share your bitch, nigga, bitch nigga," he spits.

Well Push certainly didn't bite his tongue and Wayne didn't beat around the bush either with his tweet that caused Kid Cudi to tweet "I love my nigga Pusha T, fuck anybody who feel different. We ain't ho's out here."

Will this be a G.O.O.D Music Vs YMCMB battle? Only time will tell.
Posted by Hustle at 18:18